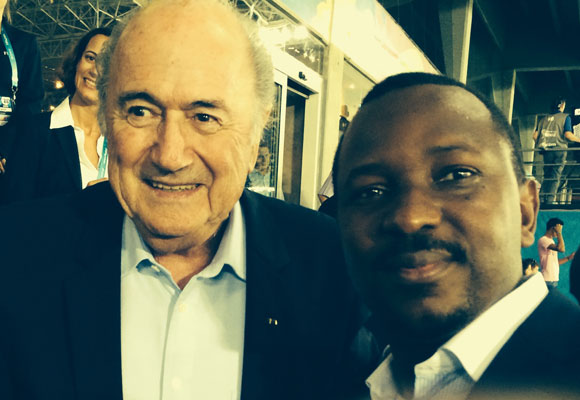 Will Dikko's business and marketing ideas beat off the likes of Taiwo Ogunjobi, Amaju Pinnick and Dominic Iorfa for the sought-after NFF Presidential seat?

Among the chief contenders for the NFF presidency is football developer Shehu Dikko, who hails from Zaria, Kaduna State. He is currently the inaugural director and a board member of the League Management Company (LMC) – contracted organisers of the Nigeria Premier League.

The presidential aspirant, though without history as a player, will use his articulate football business and marketing prowess to paddle his ways into securing the coveted seat.

The NFF Presidential aspirant, who holds an MBA with specialisation in marketing and finance, is a dynamic, result-driven businessman, who is very passionate about football.

A silent achiever, Dikko, who is the proprietor of Kaduna Professionals, 2004 Kaduna State Federation Cup, also contested the presidency in 2010, when Aminu Maigari was elected NFF president.

He facilitated the tour of Manchester United and Portsmouth FC to Nigeria in 2008 and is a co-promoter, shareholder and CEO of Deanshanger Project Limited, which counts, within its portfolio, several multi-billion Naira projects.

Upon announcing his intentions to contest the coveted seat, Shehu Dikko began, “I wish to announce that I will run again for the NFF Presidency. I believe that I can bring real value to how the game is run in our country and so I offer myself for service to a game we all so love.”

Dikko further explained that if given the Presidential mandate of the Nigeria Football Federation, he will run Nigerian football as a business with dividends for all its stakeholders.

On his ideas and strategies to run the NFF, he said that “part of his strategy for achieving this target is to champion an aggressive marketing and business programme as well the necessity for the NFF to get maximum revenues from their commercial properties."

He will “exploit opportunities to substantially increase revenues from television broadcast of the federation’s various competitions as well as set up a licensing and merchandising project for the country’s national team.

“If elected President, my administration plans to drive for financial autonomy for the Nigeria Football Federation (NFF) through innovative commercial programmes,” his published on his official campaign website.

“We will therefore encourage private sector participation at all levels, while also establishing a true and collaborative partnership with the government,” he concluded.

A Northern FA chairman said that the Maigari’s camp is behind Dikko and confident of victory.

“This group is very intact and I bet you it will take a lot to break into our ranks because we have resolved to back our ‘president’ and in a situation where they succeed in pushing him out,” Vanguard quoted him as saying.

“We have a vibrant alternative in a young sports technocrat who has all that it takes to take Nigerian football to the next level, and that man is Shehu Dikko,” a source stressed.

On Dikko’s impact in his state of birth, the Kaduna State Commissioner for Youth and Sports Bashir Usman Zubairu said that he has been “making personal donations and contributed in various capacity 'even in Millions' to grassroot football in the state.”

He also noted that Dikko has "severally sponsored football championships among local government areas, most especially at 'his country home' Zaria and support to Kaduna United."

He further noted that the NFF aspirant "is a good friend of the State governor [Ralaman Yero] and has the overwhelming support of the Kaduna state government for his ambition."

Dikko’s winning chances looks bright and concrete as we wait in patience for the outcome of September 30 elective congress in Warri, Delta State to prove otherwise when 44 delegates cast their ballot to fill multiple offices up for election.
Tweet